In some engines, the piston can actually impact a valve at the top of its movement. In these engines, called "interference" type engines, even a slight slip in cam timing can be catastrophic and result in a complete engine overhaul. This is one reason it is so important to inspect your timing belt for wear or damage.

The timing belt is an internal engine component that rotates the engine’s cam and crankshaft in sync and ensures each cylinder fires at the appropriate time. The timing belt is located under a timing cover and is in the front of the engine. It's commonly manufactured out of high-quality rubber with nylon-reinforced cords inside to extend the life of the belt. However, it is subject to incredible forces inside your motor and will need to be replaced eventually. Without a fully functioning timing belt, your engine will not run.

Not all engines have a timing belt. The timing belt is commonly found in cars and SUVs with smaller displacement engines. When an engine has a larger bore and stroke, most automotive manufacturers utilize a timing chain system that replaces the rubber belt with a metal chain. Generally, timing chains last longer than timing belts, with some rated to last the lifetime of the car. Most automotive manufacturers have a predetermined recommendation on when you should replace the timing belt, but there are a few warning indicators that a problem exists.

Listed below are a few common symptoms that might indicate that your timing belt is wearing out or has broken:

The timing belt is attached by way of a series of pulleys to the engine’s crank and camshaft. The crankshaft powers the engine’s connecting rods which are attached to pistons inside the combustion chamber. The camshaft operates the cylinder head valves and rocker arm assembly, which sends fuel into the combustion chamber and expels burnt gases out of the exhaust manifold. When the timing belt starts to wear out, it may create a ticking sound inside the motor. This warning sign may also be an indication of low oil pressure or the engine not having the proper amount of lubrication.

Since the timing belt is so critical to the operation of your vehicle, if you notice this warning sign, you should contact us as soon as possible.

If the timing belt has broken inside, the engine will not be able to turn over or ignite. When you turn the key, you might hear the starter motor engage, but since the timing belt operates the crank and camshaft, it will not turn over. If the issue is due to the timing belt being broken, it may also result in other internal engine compartment damage. In many cases, the timing belt will break while the engine is running. Some of the typical damage done to a vehicle with a broken timing belt includes damage to cylinder head hardware (rocker arms, push rods or valves), damage to crank bearings or oil pump inside the oil pan.

A worn out timing belt might also impact the engine's fire rate. The timing belt is attached to pulleys that drive the crank and camshaft as we've indicated above. However, sometimes the belt will slip on the camshaft drive and cause one cylinder to open or close earlier than it should. This might cause a misfire situation and if not replaced soon, may result in catastrophic engine damage.

Often, it's difficult to discover a problem with the timing belt until it's too late and has broken. As noted above, car manufacturers provide specific timing belt service intervals that should be stringently followed. We are happy to discuss your vehicle’s timing belt maintenance requirements and recommendations. 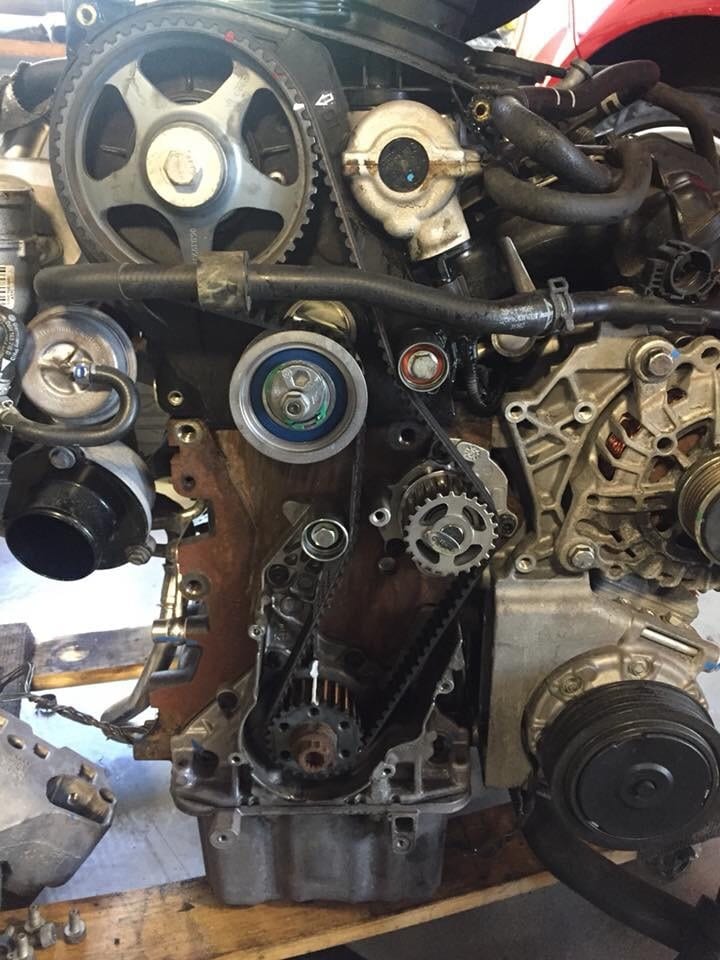